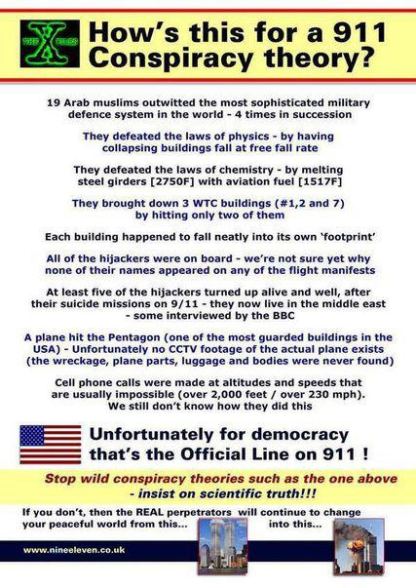 So once again its that time of year when documentaries run wild with stories and theories etc surrounding those infamous moments that shocked the western world and has forever changed the world as we know it. While this might sound just as extreme as some of the nonsense that has said to have come of this, it is a sad truth no matter how big or small its effect has been on each individual person that things are indeed different from what they were before

But here is the thing, no matter what your view is on what really happened that day, and as you can read from the photo above, there is still so many questions left un answered, it still happened, and as a result, lives were lost, family members and friends going about their day to day lives, the people flying in those planes, and the rescue workers with no thought of self preservation, only of that to help others, these were lives that were lost during such a tragic event, that is the sad truth no matter what conspiracy theory you believe

Other sad truths is that from such a tragic event, comes great stories of survival and of selfless acts. Some of these stories are truly amazing and its a sad fact that only stories like these can come from something so horrible.

While im just writing these off the top of my head and is merely just a post of thought on the matter. But one of the things that I have been wondering about lately is this, America is adamant that this was an attack on their country and on their freedom and on everyone else’s freedom as well and by this measure are using this as their scape goat excuse to flex their military might around the world in the guise of protecting freedom. Here is my question, freedom from what? What exactly were these people attacking? (dismissing conspiracy theories here for a moment)

Secondly the attack on the pentagon, basically command and control centre for american troops and finally if it was going to hit there, the last plane was maybe destined for the white house, the symbol of americans government, this doesn’t seem to be an attack on the people but maybe rather an attack on American influence overseas (aka deployed troops) and foreign policy (aka the white house)?

You know they often call these people terrorists but most of the time all they are really doing is fighting for what they believe in or fighting for their own freedom, the difference between what they are doing and what the western world often does, if you look closely at it, is often not much at all.

As I said these are mainly questions and different lines of thought, not opinions or facts. Thoughts that are def up for debate or to lead to other lines of thinking. Thats the true freedom we enjoy in this world, the freedom to think what we want and how we want, most other freedoms are just an illusion.