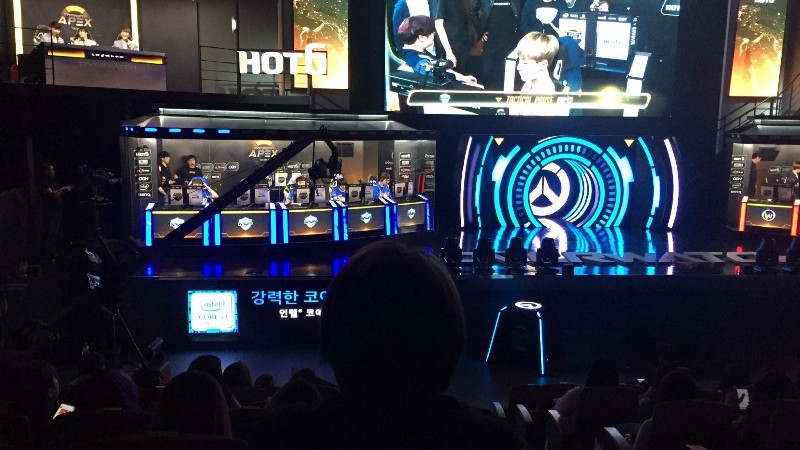 But there are problems

Last week I was lucky enough to finally attend my first Apex game live at the OGN e-Stadium. I was even more lucky because that night Lunatic Hai was playing and tickets are generally sold out to those games courtesy of Lunatic Hai’s raging fan girls.

Located in Digital Media City, in the western part of Seoul, the OGN e-Stadium sits on the top couple of floors of the S-Plex center and is really set up nicely. Seating for a few hundred people on the main level and more seating on the top floor gallery gives spectators a great view of the massive main screen set up above the stage. Player booths are set to either side and fans can easily see each team and snap pictures of them through the glass. The lights and set all work nicely as a center piece of this simple yet impressive stadium.

Casting booths for the Korean casters are up on the left and their voices are filtered into the stadium speakers while the English casters are adorned on the right. With no glass separating the casting booths, every now and then you can hear the English casters voices creep out when they are excited over a big play, but are then usually drowned out by the excitement of the crowd.

The crowd is very interactive and vocal, counting down to when the broadcast starts or laughing and cheering out loud when something big happens. They love it when the teams do their cheer at the start of the match. The fan groups for each team also cheer on each team before the start of each set which is a lot of fun. A count of 3 accompanied by the team name and ‘fighting!’ is lead by fan club leaders and cheered on by fans from both teams, just not as loudly by opposing teams. Lunatic Hai fans are extremely loud and prevalent. The crowd itself in the stadium was almost all female, I counted maybe 10 guys. These esport players really are the new generation’s rock stars!

But there are problems. Despite the greatness of the venue, the super-alert fans and the informative casters, there is the fundamental issue that the game moves too fast for the common spectator. Following the game from a spectator view point is very difficult. Limited to only a single screen, more often than not big plays are missed or cut over to too late. Granted, the camera and production staff with Apex are top notch and do a very good job of predicting which person to switch too, but they can’t catch everything. The absence of a mini-map showing player positions is often pointed out when discussing the difficulties of spectating Overwatch, and would be a welcome addition. Luckily the team at Blizzard is well aware of the problems spectators are having with the game. A recent interview with Jeff Kaplan talks about how the development team is working along side top casters to fine tune ways to address the problem. They are also looking at hiring an Overwatch Observer to add to their team to help improve the spectator experience. With the Overwatch League looming, let’s hope they can come up with a way to address the problem in due course.

Purpose built esport stadiums are the way of the future and the OGN e-stadium has got a lot going for it: plenty of room, great location and well set up. Couple this along with the production value of the Apex Series, which is way ahead of the curve with their presentation, and it is easy to see why people are looking at Korea as the model to emulate. However the real trick is for the game to come up with spectator friendly ways of viewing their game. Is this something that will forever plague FPS shooter games?