So I keep starting to write this, but then it gets put aside, something new happens and I’m back to the start again, so Im making the effort to post this up now and hope that nothing else majorly game changing happens between now and when Age of Ultron drops in a months time. Also I think there is going to be plenty of surprises during the movie and that the trailers have held a lot back

Our first proper taste of Ultron came from a leaked trailer which marvel promptly released shortly afterwards which was pretty good on their behalf. The trailer itself was nothing short of awesome, but in true Marvel fashion, left us with nothing but more questions than answers, some awesome action scenes, that epic hulk buster armor, an awesome looking Ultron and all our heroes back in action. The tone of this trailer is pretty dark, and seems like maybe Scarlet Witch is getting inside the Avengers heads and turning them on each other. We dont see Strucker or Vision in the trailer either so there is a big question over where and how they will appear in the movie (along with a zillion other questions as well)

While the trailer was our first real taste, the scene with the Avengers sitting around and trying to lift Thors Hammer was released at comic con (I think it was) and was really a joy to watch (Cap might be almost worthy?!) The avengers have always really shined when its them interacting with each other outside of battle and away from the many ‘world about to end scenarios’ they are constantly faced with, it gives us a chance to really see their personalities shine often to great effect

Fast forward to the news that Spiderman is coming back to the MCU and that at some stage he will be getting his formal onscreen introduction, most likely its too late to see and Easter eggs in Ulton for him, its prob not too late to maybe see a mention in Ant Man, at any rate we will def see him in some form when Civil War hits us next year (you can prob rest assured that there was 2 scripts, one with and one without spidey)

Finally we get the second and third trailers (which are pretty similar, all 3 just add a little bit more each time but essentially its the same stuff), which has a couple of totally epic moments but also importantly shows us a slightly more comedic and fun tone in parts that we are already accustomed too with the avengers, so while this movie will be darker than the first, its good to know that there will still be that ‘comic’ relief and same fun banter between the various team members. We see the first full shot of the Avengers literally jumping into action and also what looks like them fighting alongside scarlet witch in a scene too, oh and also more destruction with Hulk and Stark which easily looks set to be one of the most epic fights to hit the big screen. And finally, we get a short look at Vision and he looks awesome! Again this trailer hasn’t revealed too much and has left us eagerly anticipating the ride that is about to come on us on release date

So, where do things stand at the moment and possible repercussions as well as my picks for what might happen. Well there is plenty of ‘recaps’ floating around out there, this one from cinemablend is quite good so you can jump over there to get the low down on each charater.

But what follows are my picks for what will happen…

Well AOS has been focusing on Inhumans, so I cant imagine any lead up to Ultron, much like when Winter Soldier came out, AOS always reacts rather than set up. You can be sure the AOS part of the MCU will feel the fall out from Ultron and with the way things are going, its going to change the script up totally again (the AOS universe is already headed into a shit storm) and with Hydra already struggling, will Von Strucker survive? I think Hydra is going to take a huge hit again and go back to the shadows to make way for Civil War and then the big battle on a galactic scale with Infinity War being the focus (they wont be gone for ever but they will take a back seat for awhile) This will allow AOS to focus on the 2 diff Shield Organizations as well as inHumans and the Movies will be Civil War and then character build up for infinity war. So for now, bye bye Hyrda

I have no idea how Vision is going to be introduced or even what role he will play, I just hope its well done. Plus he will have the Soul Gem. In the Trailer I almost missed it at first, but Thor mentions that they are meddling in things they could comprehend (funny he is always saying that) plus we see Stark holding that sceptre again… Sceptre, Soul Gem, AI = Vision

I think we will def see either a Black Panther set up thru Wakanda being mentioned or an after credits scene with Panther in it. (Im picking both) You can be sure Ultron will want to go after Vibranium, we know Claw is going to be in the movie, it just seems for certain Panther will get his introduction in some form here

Its a long shot but I think there will be some small (very small, maybe a news paper article, or glimpse of a symbol or something) mention of Spiderman, it will be small but I think it will be there

Thanos will show up, I think Loki is set to make an appearance as well, I think both will show up towards the end of the movie, Loki to set things in motion for Thor 3, and Thanos just to show that there is another threat out there (read it somewhere else but possibly Thanos gets introduced thru one of Scarelt Witches visions) greater than they could ever have imagined possibly adding more fuel to the fire for Civil War (could also have some extra back lash into AOS, ill be interested to see how the Inhumans react to Ultron and also lets not forget Daredevil!)

As for Ultron himself, I’m going with this theory, Ultron was a concept devised from Hank Pim but re-invented by Stark. Carter is set to make some small appearance again, but I cant imagine it having any huge bearing, thou I think there will be a flash to Pim and Jan (Ant Man and Wasp) which will set up Ant Man. The Key thing with Ant Man is that it is being set up as someone taking over the mantle of Ant Man. Also after re-watching Iron Man, the end when Nick Fury states that Stark isn’t the only superhero, this is before Thor and Cap, so who else was he referring to exactly? In AOS the index for gifted people is really small but there must have been some other heroes in the shadows previously

I think there might be more information come up for Doctor Strange too, it will be small but something

With the MCU growing every year, the plot threads are becoming more and more intricate which is great and is really forcing fans to take a greater interest in the universal so that they can really appreciate, needless to say Marvel has created a winning formula, so much so I have one last pick Im going to predict now…

Wolverine to Join the MCU and to get teased at the end of Infinity War Part 1 as a post credit reveal! BOOM! 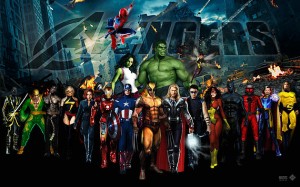