Note: I wrote this awhile ago, I am prob closer to 30 hours into the game now

So I am about 12 hours into Destiny, yeah you know, that game everyone is going on about, the one that has been highly anticipated for a few years now, that game from the same developers that brought us the Halo franchise, yeah I am sure you know the game and thought I might give my 2 cents on how I am finding the game so far… and yes, as an avid Halo player, there is a lot of Halo influence/feel in this game (not that it’s a bad thing)

Story Mode
Well to be honest this has kind of taken second string to grinding out my level to catch up with everyone else. The story itself hasn’t been that engaging so far, it is interesting but just feels kind of meh, like it was an afterthought to the game itself, it’s bad enough your character doesn’t actually say anything till a decent way into the story, and the ghost kind of feels a bit like Cortana with its quirks, comments and general attitude. At any rate I have only just reached Mars

Multiplayer
So the multiplayer system has been set up relatively small scale with the biggest being 6v6 on a domination style playlist. The maps are about medium sized which for 6v6 can be a little barren at times esp the map on the moon and mars, it can take way too long to get into the action (you do have access to your vehicle thou so you have the option of riding that into action). However the maps themselves look very well made, they have a nice flow and thought seems to be have put into how players will handle them, very reminisce of Halo multiplayer maps in their design and execution. The game modes are fun and the level balancing has been done very well meaning if your character is still level 6ish, you’re not at a huge disadvantage going against someone who is level 25 (thou their weapon handling and perks will still be better) It is a lot of fun, however as a fan of big team and epic sized battles, 6v6 on these maps to me just comes up a bit short. And then there is the reward system at the end which is totally random… getting 25 kills and top score with no reward while someone who gets 2 kills, lowest score and gets a legend item… well yeah, that is just infuriating

Character
Character creation and customization is always a hard point to talk about, how much is enough and how much is too much, should it be like the Sims or should it just be bare minimal. In destiny it feels like its bare minimal with relatively limited customization even as you progress thru, with your only option really being which armor you end up choosing and some shades you can use to change its color, there might be more but at this point of the game I am basically limited to whatever gear I can find. The 4 different emotes you can do are fun, thou some more variation would be nice too, thou at least they thought that far ahead to add them, but more customization is really needed 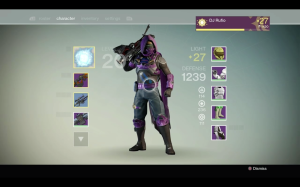 Game Mechanics
Now that FPS style games have been around for a while, basic things like screen size, mini maps, hud etc are done pretty well and are standard these days, destiny is no different, jumping in straight away you will find that usual familiarity that you would expect from any FPS. The differences obviously coming from mobility and weapons. Destiny has a few weapon options but not on the scale of COD or BF, but more or less the same as Halo. You have your main weapon classes with a few options in each, but basically you have you standard short, med and long range plus heavy damage dealers, Then you have your skill and perk system, a special skill that can be activated and tweaked depending on your preferences same with perks and each class has 2 different skill and perk sets they can learn and upgrade which can work really well once you upgrade all your skills in that set and choose the ones that work well together (Skills and perks are set together in the same set so you can’t swap them between each set) Using the skills themselves take a little getting used to at first but once you figure out how to best utilize them they can be used to devastating effect. Each weapon itself is also capable of being upgraded to give a bonus perk so this is also a consideration to take into account when choosing your weapons. The weapon handling isn’t too bad, there is enough realism there as far as futuristic weapons go thou at times it feels like there is more than just a little auto aim at play, especially when an enemy is moving, I mean I am good, but at times I wonder am I actually that good to be pulling off some of those more reaction shots that still yield a nice head shot. There is also the auto aim tracker that pisses me off to no end and seems to always be in shooters, that one where your target site will ‘follow’ a target, can be very annoying when you line up a shot and an enemy walks in between, dragging the reticle throwing your shot off. But apart from little things, the game mechanics are what you would expect and feel pretty natural for this type of game 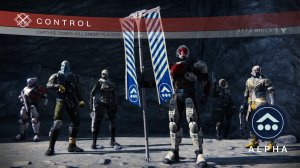 Leveling
The introduction of a Level cap and then a ‘Gear’ level is an interesting one. Basically the level Cap is 20. From there you have light levels which basically means how good your armor is, the more ‘light’ it has, the higher your level will be. Armor from Rare and up has a light value attached to it, the higher the light value, the higher your light level will be. Increasing your level itself from 1 to 20 is a pretty easy task, if you do plenty of bounties and mix your time up between completing them and doing the story mode, you will quickly hit level 20, it took me 10 hours to reach and I am sure a bit of that time was spent in loading screens… yup they do take a while, long enough to notice but not long enough to be too annoying. And once you reach level 20 the grind becomes harder since your are basically dependent on your gear and the only way to get good gear is either leveling up your reputation with each faction or by random loot drops. It is definitely a long haul after you reach level 20 and the way the loot drops and reward system works, it is also extremely frustrating to say the least

Social Interaction
The game is geared to a degree for social interaction to form fire teams and to go on raids, however it is still lacking with its options for solo players to easily link up with other groups of players. Also the choice to either solo a strike or to form up with a team of individuals is also not there (sure you can join a strike and hope you get matched up with people, but more often than not you just get dropped in solo or half way thru an ongoing strike) having these kinds of choices you would think would be an important factor for a mmo style game like this as there is always a large base of solo players who struggle to enjoy the team dynamics of some of the more difficult content because they can’t get matched up with other players or don’t have enough friends playing. The other thing that bugs me is the limit of players that seems to be apparent when roaming around on Patrol, when destiny was first announced it looked like there was going to be more epic-ness with regards to player numbers and monsters you can come across, but at the moment everything is just so small in scale, most of the public encounters can easily be handled by 1 or 2 players, multiplayer only 6v6, strikes 1-3 players and the single Raid for 6 players…

Extras
Destiny comes with a nice companion app that allows you to look at your progress from either your mobile or tablet and has some pretty good information, also you can track your stats online too 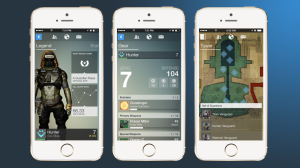 Overall
It is a good game, just not an outstanding game, it feels like a good start but it doesn’t hold the epic-ness I was hoping from it and can see it easily fading into the distance as new games come out. While Bungie has done a nice job here in their post-halo era, for me, the scale of this game is just too small from what I was hoping for on the new generation of consoles, if you can have 64 players running around in BF4, you would expect other FPS games to be able to step into the same realm of share numbers as well, granted BF has been around for a while, but I think this is the kind of approach that needed to be taken with Destiny, or hopefully the system is in place so they can scale it up in the future, but for now, this is what we have, good, but not great 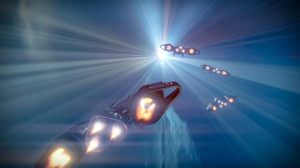 Update
So I have finally decided to finish the campaign… meh yeah, that was boring. I am now level 27 and basically the grind for me goes like this, weekly strike, crucible and vanguard bounties and moon and mars farming as well as public events. Not overly exciting at all. It seems most of Destiny is just the focus on getting to level 30 so that you might have a chance of completing the Raid if you can ever find a team